Diana Mardarovici is a gender equality activist who grew up in Moldova and now owns her Marketing consultancy agency, Yellow Marketing & Sales, in Bucharest, Romania. She is a leader in Junior Chamber International (JCI), an organization of active citizens. As JCI European Development Council Chairwoman, she represents 24 000 members.

Diana believes that all women promoting gender equality and equal opportunities have different ways of doing it and, even if we disagree with each other, we should not put each other down. Overall, we’re all moving in the same direction so we need to give each other space to do it our ways. Not one action will solve the problem but the combined actions will. 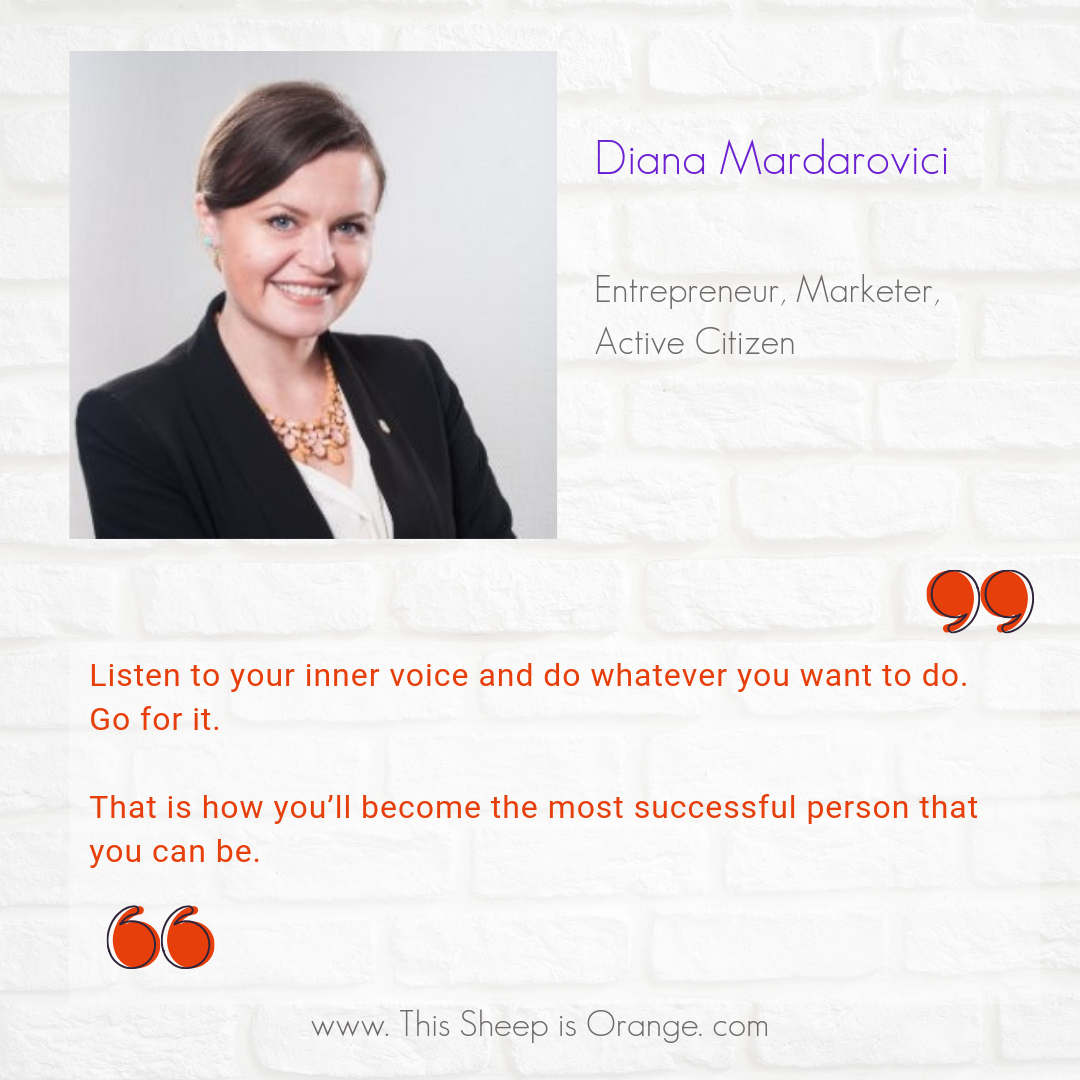 How did you look like when you grew up?

I was very lucky. My parents never gender applied me. They always told my older sister and I that there was no limit to what we could do. I was educated with freedom, we had some autonomy at an early age. We were encouraged to achieve in school and to solve our own problems. I was girly, and I still am, doing my hair and nails, but I was also a leader in my school at quite an early age, I organized a small protest. I was also the treasurer of my class, so I was trustworthy.

How did you develop your leadership skills?

My mum was a political leader, member of parliament in Moldova and also UN Women ambassador supporting women’s rights and my father is a business leader, part of Rotary International, so for me being part of an NGO was natural, I just had to choose the right one. JCI combines entrepreneurship, advocacy and leadership which resonated with me and so I joined this organization. In my career I was promoted very fast, I was managing people pretty early on. In  12th grade I participated in an exchange program in the United States called  Future Leaders Exchange Program. I guess I learned some skills from there: I left Moldova at 17 years old in 2001, we didn’t have internet that was so available and cheap at the time. It was an experience that helped me grew up.

You took different leadership positions as JCI Bucharest President and then JCI Romania President. As a JCI Vice President you were assigned to 8 European countries and today you’re in charge of JCI Europe’s development.

What was your “ahah moment” to start it all?

Being part of JCI Bucharest, I noticed that there were things I would do differently. I don’t necessarily have the best ideas but certainly they were things that I believed could be done better.

I am motivated by the things that I can change and I seek the positions that allow me to make change possible. If JCI Bucharest and JCI Romania would have been perfect in my view, then I probably would not have run for a leadership position.

How did you decide to start your own company?

I always knew I wanted to be an entrepreneur but I wanted to have a job first to learn. I worked for a media agency that was doing advertising and marketing etc. The last year I was feeling I was not learning. I had several discussions with my former boss that was also my mentor who gave me some fabulous opportunities. I told him I need a challenge but there were no opportunities anymore. I decided to go on my own. I wanted to do various things and I talked to my sister who was my financial backer and she said that I should do what I know about. So, I ended up doing marketing. The last 5 years I learned a lot about what to do and not to do with my clients. I ran projects that I am very proud of. I am looking forward to expanding the consultancy business but also, with my partner we have a start-up financed by a grant from the government and we’re starting a shirt embroidery business. The consultancy business is too much dependable on myself and I am looking at opportunities that can be scaled and also at social entrepreneurship.

Which accomplishment are you most proud of?

My boss gave me the opportunity to organize a football match between Dynamo and FC Barcelona, with 35000 people in the Romanian National Arena. At a point I was in the control room of the stadium and the national anthem was playing. I got out and I saw Messi and the other players doing everything I asked them to do by email, like waving and where to go. I felt very proud to see the outcome of all the hard work I had put in; this moment will stay with me forever.

How did your boss become your mentor?

It came naturally as he saw in me a lot of drive. When one day I made a mistake of 30000 euro he covered me. That’s when I felt truly mentored and dedicated to that company.

Is there a particular failure that you grew from?

I made so many mistakes. I didn’t know the tax law and I made a 5000 euro mistake. This is a lesson I learned pretty fast: you need a good accountant!

When I worked with my clients to develop their vision, I pushed one of them in a direction that I wanted to go that was not their vision. So, they never owned the marketing and the business strategy as it was not coming from them. I regretted that but this is how I learned!

How do you make decisions and decide what to prioritize?

I am very instinct driven. It didn’t always turn out to the best. I am looking for partners who are different than who I am to benefit from two different ways of things.

The idea of having it all is a myth. If your company is depending on you, you always have to sacrifice something as I had to sacrifice my business by being so much involved in JCI.

Do you have any tricks to make more time?

What is your next challenge?

The new embroidery business I mentioned and also to develop a product line for female hygiene products that are environmentally friendly. I’ve been to the European Parliament, I heard a lot of ideas, I also met some entrepreneurs already working in that direction. The existing solutions are not good enough. There will be some grants given here for social entrepreneurship and I am looking to apply and take this challenge.

You want to read more stories of inspiring women? Follow the blog!